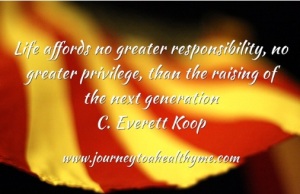 While I was sitting down enjoying my smoothie, I began to think about the reason my daughters started their own workout routine.  It was because they were watching ME while I do mines.  I do not know why the title of this post came to my mind regarding my children but Their Eyes Are Watching.

There is a great responsibility that comes with the role of a parent.  My children have observed me exercising for years.  When they were younger, I used to take them with me when I went to the track at the local high school and walk/run during my daily evening routine.  Three of them are teenagers now.  Lately, both of my daughters have been doing an exercise routine among themselves.  They explained how they could not workout with me because I exercise a long time lol.

Actually, the conversation with them also made me pay attention and reevaluate how long I was exercising.   They wanted to take better care of their bodies by adding exercising to their routine so they researched some workout routines they could do at home.  They have been trying to get my oldest son on board lol but he say he got his own workout schedule he will be doing.  I discussed with them how often they should or should not exercise and how not to do any strenuous exercises.  Yes, I had a proud parent moment.  I knew that they knew I was exercising but I did not know it was encouraging them to do it also.  They did not give me any kind of clue that they were interested in working out.

When I began this journey four months ago, all of my children participated for the first couple of weeks to cheer me.  When I told them how much weight I had lost, they all smiled and congratulated me on accomplishing my goal.  They never said anything about the extra weight I had gained.  They have joined me in a couple of my workout routines lately since I have adjusted the time.

When I started my hair care journey back in 2010, I also cared for my daughters’ hair also.  They hair grew and became strong but as they got older, they wanted to do their own hair and they did not stick to the routine consistently.  Over the years, they still do the basic (like deep conditioning, protein treatment, moisturizing here and there, oiling with olive oil here and there) but they like flat irons a little bit too much.  They use a heat protectant but they did do it too much.  Now, since I have decided to start back focusing more on my hair again, they want to also with theirs.  So, we are all on a hair journey together again but this time they are willing participants lol.

I named the title of this post “Their Eyes Are Watching” because children’s eyes are.  Children constantly pay attention to what their parents are doing.  They may act like they aren’t but they are.  I know that children observe what parents do.  I have observed mines doing and saying things that they have pick up from me often.  I just felt the need to share this.

They pick up the negative as well as the positive from parents.  It is so important to know that as a parent THEIR EYES ARE WATCHING at all times.

4 thoughts on “Their Eyes Are Watching!”

This site uses Akismet to reduce spam. Learn how your comment data is processed.

Hi, I’m JcCee. It’s so easy to get caught up in the struggles that comes with living and we forget to view  life with our best (fancy) eyes. I created “Life Through Fancy Eyes”  as a creative outlet to explore and develop life tools to help us see with our best eyes. Take a deserving break with your fav cup of deliciousness. You may find topics on healthy living, plantbased/vegan recipes, self care, inspiration, etc.  Sit back, relax, & let’s find what we need to journey through life with  our “Fancy Eyes.”